TAMBUNAN:Parti Bersatu Sabah was born here, and it will continue to be the party’s political base.

Stressing that Tambunan has always been PBS’ stronghold, its President Datuk Seri Dr Maximus Ongkili said it was no surprise that the party remains sentimental in the hearts of many middle-aged and elderly people here.

“Despite losing the Tambunan state and Keningau parliamentary seats to our partner in Gabungan Rakyat Sabah, we must not be disheartened and instead continue to recognise the district as our political base. 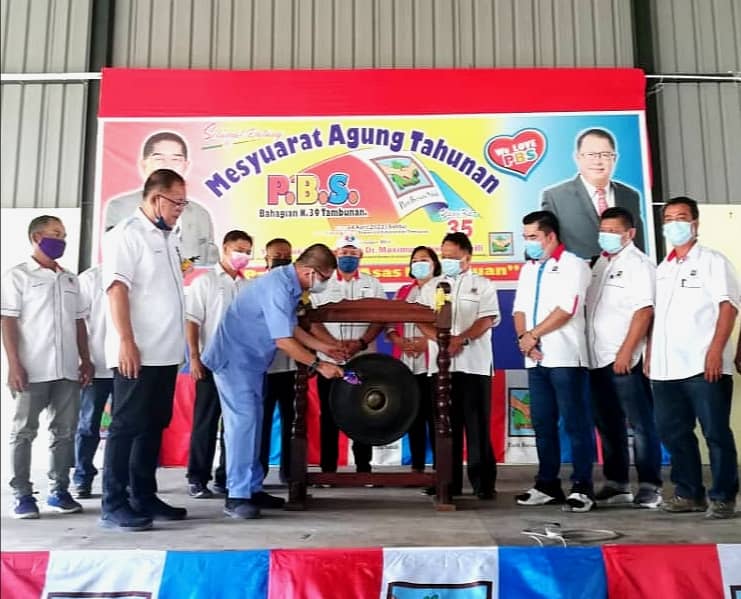 “This is a wake up call for PBS and a signal that there is a dire need to reorganise both Tambunan and Keningau,” he told the crowd at the PBS N39 Tambunan 35th Annual General Meeting, today.

Having said that, Ongkili stressed that reorganisation of the party is already underway from its three divisions in Keningau, namely Tambunan, Liawan and Bingkor, and it would be appealing to the younger generation.

“The sentimental feelings towards PBS are still strong, especially among the middle-aged and elderly folks, and we would like to welcome new breed of leaders into the party.

“Our desire now is to convince the younger generation to  realise PBS struggles, observe the party successes and experiences. New parties come and go. When election comes, they emerge, and when they fail to win any seats, they are gone,” he said.

Ongkili added that PBS is preparing the ground to stake claim for the Keningau parliamentary seat, which traditionally belonged to the party.

After 36 years of existence, PBS is the oldest multi-racial political party in the country, and this uniqueness is known to Sabahans.

“Some, maybe, got bored; some may have gotten tired of listening to our repetitive stands and core values, but these are reflective of our party constitution. We must never apologise as these have been the bread and butter issues which founding leader Tan Sri Joseph Pairin Kitingan majored in when he first formed PBS in 1985.

“In the last one decade, as new political parties were formed in Sabah, we were conscious of the sentiments of many Sabahans that the kind of marrers championed by PBS such as state rights, large presence of illegal immigrants and unity were getting outdated.

“But we persisted and argued that these were core values to be inculcated in the conscience of Sabahans in order to make Sabah safe, united and prosperous,” the Minister in the Prime Minister’s Department (Sabah and Sarawak Affairs) added.

He said PBS value the historical and political struggles of the party and believe that their original supporters feel “home” in PBS for sharing their sentiments and worries.

“Our mission now is to welcome and nurture young leaders, and hope the moulds of new breeds would share new ideas and their expertise to rejuvenate PBS.

“Let’s continue our struggles, and get the young people to also embrace our missions and visions. PBS is you, and you are PBS. PBS is here to stay and  Tambunan will have a major role to rebuild PBS,” he concluded.